Continuing the theme of my penultimate post, a documentary report has appeared on Al Jazeera (‘Images of Revolution’, dir. Ibrahim Hamdan) presenting ‘the story behind the iconic images of the Arab uprisings as told by those who filmed them’. It’s a pretty good film for anyone thinking about the subject, or teaching social media, from whatever angle, for two reasons. First, because it covers many of the questions that people have been asking about the role of the social media in fomenting the revolutions in the Middle East, and of social movements everywhere. And second, because it does so without the unctuous commentary or tendentious presenter that remains obligatory on our own television channels, but entirely in the voices of participants themselves: reporting from Tunisia and Egypt, with a postscript from Libya, Hamdan seeks out people who filmed some of the key mobile phone videos that helped to galvanise the uprisings, and interviews them in the places where they did their filming as they tell us how they did it.

We discover, first of all, who they are—mostly educated middle class professionals or students already connected to the internet. We then begin to learn, with the help of local activists and observers, something about the dynamic that the social media brought to the political situation. Why there was no uprising in Tunisia earlier—where the hated regime regularly meted out bloody repression to protestors—is explained by an academic. Between 2008 and 2010, he says, the number of people with mobile phones and FaceBook accounts doubled, and this expanding ability to communicate had the effect of changing the political conditions. In other words, it’s a question of critical mass (as Engels would have understood: the point at which a quantitative change becomes a qualitative change).

Given the tight control of the media by the regime, FaceBook and YouTube provided a means of dissemination of images—both photos and video—which acquired greater affective power than text. A new media activist asserts that ‘no text can ever affect people in the way that certain images do’. The value of an image derives from its particular moment and context. ‘It’s a summary of what happened, it’s the thing that stays in our minds’ after we’ve forgotten the details. Others add their opinions. Pictures convey complex messages with great rapidity. Certain images leave a strong impression, but it’s their repetition and replication—people send them on, each to their own network of contacts—that makes them iconic. 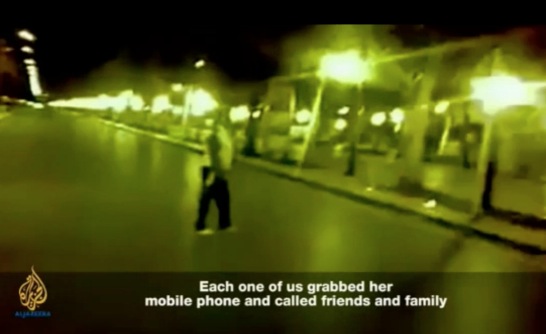 Media activists quickly pass them to television stations, especially Al Jazeera itself, who rapidly rebroadcast them. ‘When such an image becomes iconic, it becomes a powerful truth’, says another contributor. It also impugns the official image, the ‘only one image and only one narrative’ that the regime promulgates through tight control over the national mass media.

Mobile phone videos are like moving snapshots with sound (which is very important: it gives the image its emotional tone). What we learn from the videographers themselves is that like all snapshots, these videos are often the result of chance and accident. The result of being in the right place at the right moment to get a view of events you can see happening in front of you—but maybe without understanding what’s going on, and only realising afterwards when you look at what you filmed. 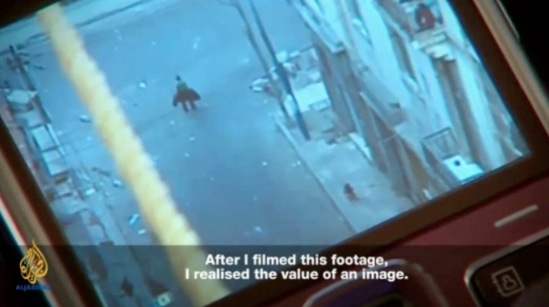 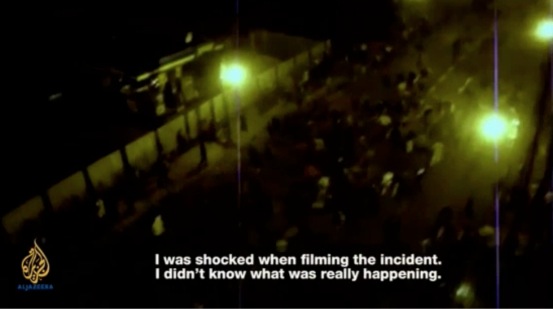 An English teacher in Tunisia who took the video of a solitary man in the street being shot in cold blood by the military, thinks her video had two powerful elements: ‘First, the man was shot for no reason. And second, as my friends told me, our cries’—as they react to what they’re seeing. This is a critical factor: the sense of the videographer’s presence, often on the soundtrack, is part of the power of the message that comes across. This power, in the right circumstances, is enough to move people to action. Individuals have testified that seeing one or other of these images changed their stance and brought them out onto the streets.

Mobile phone cameras combined with social media turn people into citizen journalists. The citizen journalist is an ordinary person (maybe a professional but not a professional photographer) whose camera turns them into a witness of a special kind. Their testimony is not locked up in their heads but fully public. Nor is it disinterested, because to publish it is an act of political intent and has direct political effect. These images are used to defend people’s rights. The videographer is often filming events in their own neighbourhood. They generally have better and more direct access to the street than the professional—who gets there late and always seems like an intruder from another planet. And they are not constrained by professional rules and ideology—all they need is a fairly steady hand.

What emerges from this film is also that a powerful symbiosis now exists between different communication networks, operating at different levels and scales. Because of digital convergence, these networks are all highly interpermeable. The social media become a bridge between different spaces: local, national, regional, global. They plug an immediate physical presence into the remote and virtual presence of screens near and far. That is to say, they operate both locally and globally at the same time, in the same instant. The plethora of pictures coming both from scattered locations and points of mass concentration, not only destroy the image the regime has fabricated for itself, but because the internet is borderless, they function like a kind of alternative news agency, dispersed and international in its reach, able to circumvent the local state-controlled media. The State responds with fear because it feels no longer in control. And it isn’t.

There are many further questions to be asked about how the messages in these videos are encoded to convey complex information with such great rapidity, and how this encoding functions differently for distant audiences in foreign countries. One of the crucial elements is the very lack of professional sheen, which is often felt as a guarantee of authenticity. (This is nothing new: it’s like the reality effect of cinéma vérité back in the 1960s.) Thus a single piece of footage can win the sympathy of public opinion, while the flow of such images carries people beyond sympathy into active empathy, emboldening masses both at home and abroad.

In short, there is no room to doubt that mobile video affects the course of events profoundly, invigorates popular sentiment, and serves to raise the political stakes. But we need to see this in proper perspective. First, historically: the rebellious and subversive use of the modern media goes back to pre-digital times, indeed all the way back to the days when Lenin edited the Communist newspaper Iskra from a room in Clerkenwell a hundred-and-some years ago. Which is to say, it is not the media that make the revolution, but revolutionaries, even if they’re not Lenin or even communists. Second, synchronically, in relation to the powers that rule the global economy and its intensifying crisis. Because the social media link in to a world overtaken by crisis within the very system that brought us the globalisation that produces the social media to start with. As if the underlying message of the incorporation of social media is that globalisation is coming home to roost just about everywhere. The revolutions that have succeeded in throwing out oppressive regimes will not necessarily succeed in installing the popular democracies they call for, but they continue to inspire successive waves of protest in different continents which may yet rescue globalisation from its bad name, for this is what we can see in the videos which every successive popular movement now inevitably generates.