Back from my trip a week ago, I buried myself in editing the video I shot in Chile on the student movement, which screens on Saturday 3 December at the Latin American solidarity conference in London and Saturday 10th December at the Roehampton Human Rights Film Festival.  Now it’s done, and I break off briefly to give a quick report on the trip.

I posted my arrival with a photo on fb, flying over the Andes into Santiago – 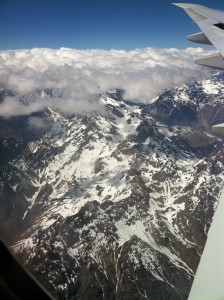 where my super-friendly and efficient host (Chileans use the term ‘super’ a lot; things are ‘super bien’ and ‘super rico’) was Tiziana Panizza, experimental cineasta, young mother and leader of the Masters in Documentary at the University of Chile, which has now been running for a couple of years. The deal was to give a couple of masterclasses (one on Latin American cinema, one of film music) and advise the faculty on stuff like how a PhD in creative practice works.

In addition, I asked for any students interested to work with me on putting together a video about the student movement. Being at the University of Chile, a leading public university, means getting close to one of the foci of the protest movement against privatised education, and a small group of film students took shape, who supplied me with enormous generosity  with huge amounts of footage they’d shot over the past few months of occupations and demonstrations. The Masters course attracts mature students, like Rodrigo, a psychologist in his early 30s who’s been filming a small secondary school occupation in central Santiago, and the changing relation between the kids and their parents. Then came his friend Renato (who attends another film course at ARCIS, which doesn’t do documentary). Together they took on me trips essential for my education, including the enormous flea market of Bio-Bio, which goes on for untold blocks, full of everything from antiques, valuable and otherwise, to clothing, food stalls,  bookstalls, music new and old, and not least DVDs—the lot. Here you can find unsuspected cultural riches crammed alongside the detritus of consumerism, including some of the earliest of those bulky camcorders, still in working order (so the man said). The kind of stuff that in super-developed countries gets thrown away. One stall keeper with a small stash of ancient cinema projectors told us collectors come down from the USA to buy this stuff. 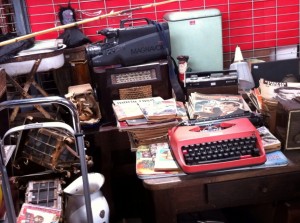 Among the undergraduate activists, I met Leonardo, one of small group of film and journalism students who have set up a web site, Revista Vaso, to share content, including a YouTube channel, which I recommend.

Santiago surprised me—a very colourful city in the spring (which gave me terrible hay fever), and remarkably green, even in the city centre, which has far fewer colonial buildings that many other Latin American capitals, largely due, I was told, to the history of earthquakes. I was lodged in the ‘posh’ district (Tiziana used the English word) of Vitacura, in the north-east of the city, which I learned was largely constructed after the return to democracy in 1990—the idea that it was Pinochet who ‘modernised’ Chile is a myth.  There is little sight here, with its pricey restaurants and fashion shops, of the lower classes who populate their own zones (unlike Buenos Aires, where housing in many districts is much more mixed).

Renato took me to the shanty town where he grew up, Población La Victoria, which inscribes itself in history as the first land seizure for urban development in Latin America, back in 1957. Here there isn’t much greenery but the streets are well laid out, and there are wonderfully colourful murals everywhere. 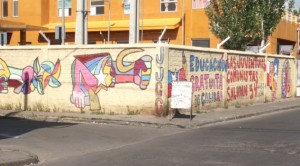 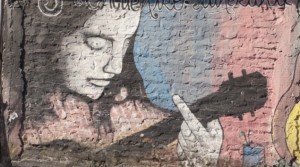 The second of these is a portrait of Violeta Parra, artist of the people and mother of a whole dynasty of Chilean singer-poets, and the subject of an impressive new film, the biopic Violeta se fue a los cielos by Andres Wood.

My first weekend was spent in Tiziana’s company in Valparaiso, to which she is very attached (we stayed in the apartment where her grandparents lived, with a wonderful view over the neighbouring bay of Viña Del Mar). Tiziana has recently published a wonderful study of Joris Ivens great documentary A Valparaiso of 1962, and going there for me was like entering the film almost fifty years later. (Joris Ivens en Chile: el documental entre la poesía y la critica – dual language edition.) I did a lot of filming there, of which there is only one shot in the first version of my video—but more in the longer version I’m planning to edit over Christmas.

The trip was graced by the attentions of the god of coincidence—you wouldn’t believe it if I recounted them all—one of which was going out for breakfast on Sunday morning (before visiting Pablo Neruda’s house) and meeting a friend of Tiziana’s (they share a producer), Marcia Tambutti Allende, Allende’s grand-daughter, who I learned is currently making a film about him, which searches for him from within family history. She invited me to come and visit her grandfather’s private home in Santiago, where he lived until assuming the presidency. This was by far the most moving moment in my trip. Here were objets d’art, paintings, photographs, even furniture, which are charged with a sense of history and loss, all the more poignant because this is not a museum, but simply a house kept as it was by the family.

There’s much more to tell, but to keep it short, the other thing to mention was the enormous pleasure in catching up with three old friends from three or more decades ago, two of whom I first met in Cuba. I took tea one afternoon with Miguel Littin, who was one of the pioneers of Chilean and New Latin American cinema in the 60s and early 70s—and still at work; he has a new film in preparation also about Allende, and his last day in La Moneda on 11 September 1973. Second was Pedro Chaskel, who several times came to ‘La Chile’ (as the University of Chile is affectionately called), which meant we had time for lots of chat and then dinner together. And lastly, the actor Hugo Medina, who I first knew in London, where he was one of the Chileans exiled after the coup. Two times winner of Chile’s best actor award, Hugo has a wonderful rustic house which is largely self-built and stands high on the hillside above Peñalolén. 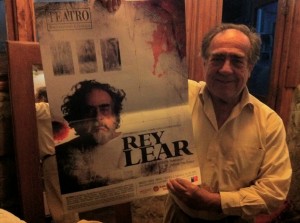 A last word. Here in England, when I went out to film the protest movement at the beginning of this year, I have to confess the experience made me feel my age. Visiting Chile, however, had quite the opposite effect: it made me feel rejuvenated.

This entry was posted in Chile, Latin America, Miscellany. Bookmark the permalink.

One Response to Back from Chile