It doesn’t only happen in Turkey. Yesterday, while filming in Santiago, I had my first experience of tear gas. I went to film the latest student protest march against the heavily privatised education system which is a heritage of the neoliberal policies of the Pinochet dictatorship. I filmed far more than I needed, because it was huge and very impressive (it took 75 minutes to pass the National Library where I was stationed) with all the expectable banners, drumming, bands, and dancing, and perfectly peaceful, following the pattern established a couple of years ago when the protest movement began.

Everyone I talk to declares that the students have radically changed Chile’s political agenda, because it is now no longer possible to escape the fact that the country continues to be subject to the Constitution introduced under the dictatorship in 1980 (with a few minor amendments since). With presidential elections coming up towards the end of the year – after the fortieth anniversary of the coup – people tell me that all the candidates are talking about the need for reform of the education sector, which is heavily privatised, disadvantages large swathes of the population and imposes huge debts on university students. (Sounds familiar? If you want to see the future of the Coalition government’s policies, look to Chile.) The students themselves, including those who have occupied numerous secondary schools – I went to film in one of them last week – are also intensely aware that undoing privatised education is only a first step. Moreover, they have overwhelming public support. According to the leader of the public service union, whom I interviewed on the street just before the march came by, eighty per cent of the population are behind them. And such is the alienation people feel towards the politicians, there is also talk of huge abstentionism, at least in the primaries later this month when the parties settle on their candidates. There is even a campaign for an electoral strike (I interviewed one of its leaders last week).

When the march had gone past, I followed a tip-off from a friend and went to the Casa Central of the University of Chile, the main administrative building which has been under occupation for nigh on two weeks (where I also filmed last week). We met up, went inside, I was given permission by the students to do a little filming in the patio, then my friend, who is well prepared for these things, brought out his gas mask, and we joked about it.

I’d been warned that the real trouble always happened after the main march was over, so at this point I left by the main entrance. Another demonstration, presumably unauthorised, was going on outside, blocking the Alameda, Santiago’s main thoroughfare. Someone said the students were proposing to march on La Moneda, the presidential palace just a couple of blocks away, but pretty soon the carabineros arrived in force. I picked a position in the reservation in the middle of the avenue to see what transpired and continue filming.

It isn’t clear to me exactly what happened inside. Before I left the building, I saw students donning face masks, which I took to be a piece of burlesque against a new law recently introduced which forbids their use. Outside, I was in time to witness the water cannon and tear gas. I thought I was far enough away, until a whiff of gas reached me. It was slight and not very serious, but nonetheless, a pretty unpleasant experience.

The following morning I was told that the special forces were responding to ‘delito flagrante’ (flagrant offence) with students pelting them with stones and throwing molotov cocktails. I could clearly see the former from where I’d been standing, but have no evidence of the latter. What I didn’t know was that the special forces had entered the building and were wreaking havoc. According to my informant – a video activist – whatever provocation may have been directed against the carabineros was unlikely to be the responsibility of the students running the occupation. He suggested two possibilities. One is that it was easy enough for younger students, from secondary school occupations, to enter the building, and these are often less disciplined when it comes to political action, but they’re also very angry, especially those from poorer families who haven’t shared in Chile’s economic bonanza. The other possibility is that those causing trouble are quite likely to be agents provocateurs, whose infiltration was well known to the student movement.

The video that follows was shot by a student activist inside the building after I left. 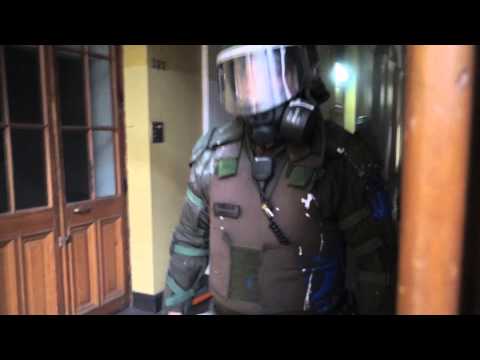 You can the video of the student movement that I shot back in 2011 (with the help of video activists) <here>. It is in no way out of date.