The world represented by the mainstream media is still governed by a division into centre and periphery which has been thrown into doubt by recent events—not only the global effects of economic crisis, but the popular protest movements which have sprung up in Europe, the Middle East, and now the USA. It is nowadays the general rule that news from the old periphery, as well as the margins and the interstices of society, arrives in the social media before reaching the mainstream media. It was three or four weeks before Occupy Wall Street was picked up by the mainstream, and predictably it only broke through when cameras on the streets caught the first acts of gratuitous police violence and posted them on the web.

Despite the unmistakable symbolic resonance of the place name, the American media professed bewilderment. As Naomi Klein commented,

“Why are they protesting?” ask the baffled pundits on TV. Meanwhile, the rest of the world asks: “What took you so long?” “We’ve been wondering when you were going to show up” —

because this is not an isolated event but part of a huge and momentous upsurge in political consciousness sweeping across the globe in waves of popular non-violent mobilisation—especially among the young—against the free rule of finance capital at the expense, in the vocabulary of Occupy Wall Street, of the 99 per cent.

When October 15th saw 950 protests in over 80 countries, ranging in size from a few hundreds to tens of thousands, this was too big for the mainstream to ignore. However, the social media which make such coordinated mass global participation possible are a very recent phenomenon. Language remains a barrier, and bad old habits persist, so for example, the massive student protests in Chile, which have been going on for nearly six months—this is still hardly covered by the mainstream. Why Chile, which the last we heard, had a hugely popular President basking in the glory of the rescue of the trapped miners?

If the pundits and reporters find the target of Occupy Wall Street too diffuse, that of the Chilean students is unambiguous: the social cost and injustice of the most privatised system of higher education in the world. This has particular lessons for us in the UK because this is what happens when a country adopts the kind of neoliberal tenets that are now being imposed on us here. Under measures introduced during Pinochet’s dictatorship—the classic account of its origins is in Naomi Klein’s Shock Doctrine—universities are now only ten per cent publicly funded. The rest is down to families or students themselves who, like those in the USA and now here in Britain, are consequently forced into huge debts. Similar privatisation rules the schools, and the demand of the Chilean students is simple: universal free education.

A few reports of the Chilean protests have appeared in places like Time, the Guardian and Huffington Post, but not many people I speak to—on campus, at meetings or socially—are more than vaguely aware of what’s going on ‘down there’. According to the Guardian on 7th October,

The first murmurings of the “Chilean Winter” came in late May with the first takeover of a public school. Five months later, around 200 state elementary and high schools as well as a dozen universities have now been occupied by students. Weekly protest marches gather between 50,000-100,000 students throughout the nation…

It’s another general rule that grassroots movements like these nowadays engage immediately with digital communication, always including video, and the Chilean students, who are no exception, have proved adept at various different kinds. For an example of how impressive a simple video record of an event can be, here’s one of the first—it’s a single continuous shot—dating from last June, when thousands of protestors staged a mass performance of Michael Jackson’s Thriller in front of La Moneda (the presidential palace where Salvador Allende’s life came to an end in 1973).

The protests haven’t always been fun, and there are also video testimonies of the repression unleashed by the forces of law and order, like this one, taken on 24th August: 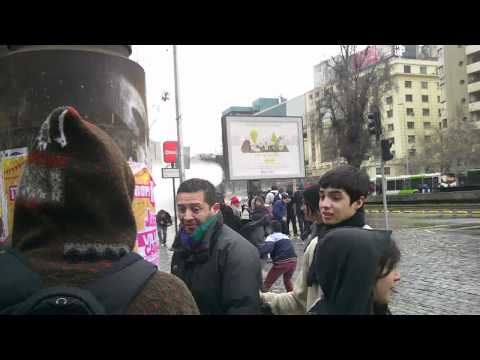 Huffington Post reported that the protest dancers explained the mass performance of Thriller as a metaphor of the zombie education system they suffer from. It also signals their citizenship of the global culture of modern youth everywhere. Indeed the Chilean students have instinctively understood what it means to be located simultaneously in the periphery of the underdeveloped world and in the local hub of a globalised economy, and they’ve made several very short videos in different languages, addressed to viewers on other continents, explaining what their protests are about. Here’s one in English: 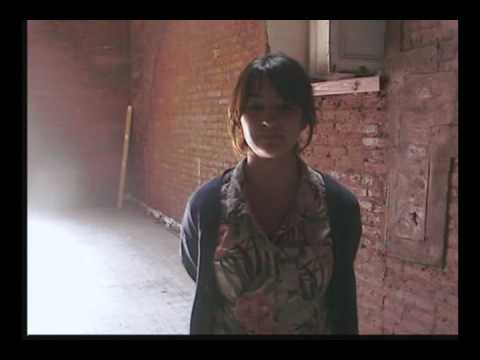 And another in several languages together, called ¿En qué idioma te lo digo?—’What language shall I tell you in? (with English subtitles): 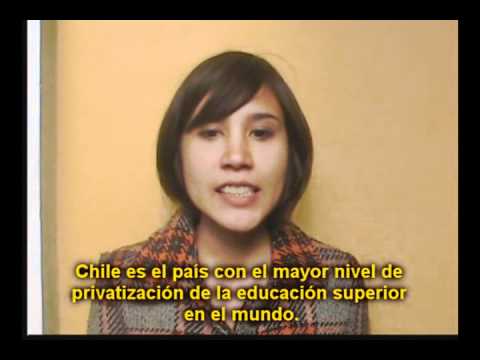 A report in the New York based  Indypendant suggests that

The younger generation that came of age after the dictatorship, does not have the fear of their parents’ generation and their actions have reawakened older Chileans who had despaired of ever seeing real change again in their country. The dream of the Allende years of a socially inclusive Chile has not vanished in spite of almost four decades of neoliberal social engineering.

Another thing these videos tell us about is this connection with struggles of the past, which comes into play through music. A telling comment appears on the Australian site, Green Left:

Perhaps the song the writer heard was Violeta Parra’s ‘Me gustan los estudiantes’—’I Like Students’. At any rate, a whole bunch of music videos have appeared which all use this song from the 1960s, either in new or old versions. They include La revolución de la conciencia: 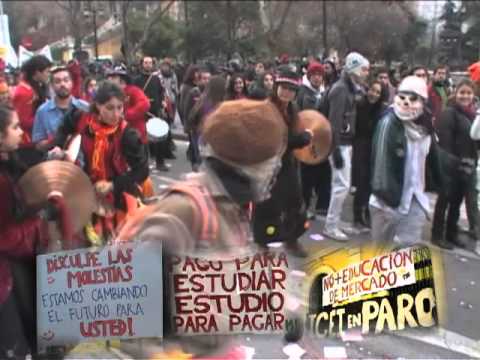 Finally, for those with Spanish, you can find a playlist of videos from Chile here, which includes this delightful video letter to students in Chile from students in Mexico, which has its own history of student struggles. 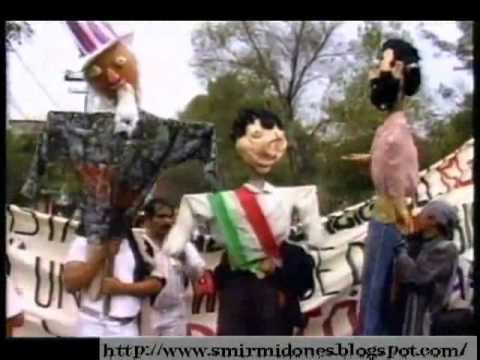