A friend in Mexico asks me about the election. Can the left win? This is what I write back.

Gramsci’s famous dictum is very relevant: pessimism of the intellect, optimism of the will. Objectively it doesn’t look like Labour can actually win, but it does look increasingly likely that the Tories won’t come out of it nearly as well as it looked at the start, maybe enough that Mayhem will not be strengthened but weakened.

The opinion polls are an uncertain guide. The overall trend is clear – Mrs May has lost more than half her supporters – but there are many imponderables, like the youth vote. The more of them vote, the better Labour will do, since the majority seem well inclined towards Corbyn and huge numbers of them registered to vote in the last few days before registration closed. On the other hand, the (ultra-right) UKIP vote has collapsed, and their vote going to May is part of the reason for her lead.

Nonetheless, there was an interview on TV with the doyen of psephologists, a certain David Butler, who said what must seem clear to many but no-one else had yet acknowledged: the shift in the polls since the campaign began is bigger than in any election he’s covered since 1945. In other words, this is an absolutely remarkable election. 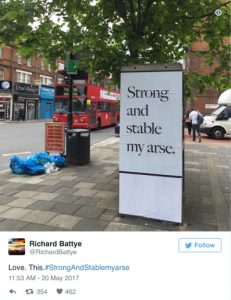 Why is this happening? Partly because of May’s stupid campaigning. She’s made several bad mistakes, beginning with her refusal to debate with Corbyn face-to-face on television. Then repeating her call for ‘strong and stable’ government ad nauseam till it became meaningless, then announcing policies that go against pensioners, etc. Her most egregious new policy – for recovering the costs of social care for the elderly from the value of their property (in excess of £100K) after their death – was immediately dubbed a ‘dementia tax’, and had an immediate negative impact on the opinion polls, especially when her ministers found themselves unable to defend a policy inserted late into the party manifesto which they hadn’t even known about.

On the other hand, Corbyn has campaigned brilliantly. While May has been tightly controlled by her handlers, never engaging with common folk, Corbyn has been out on the stumps gathering really huge crowds, and Labour’s policies – to reverse austerity, restore the health service, education, policing etc., abolish students fees, nationalise rail and other infrastructure – all these are broadly popular. Because, just as he says, people are angry about the cuts and the loss of social provision.

So May’s opportunistic election call is backfiring. She thought she could fight a single-issue campaign on Brexit, without revealing her negotiating strategy with Europe but simply insisting people choose between her and Corbyn. Corbyn never accepted this bait and immediately appealed to the country on the whole agenda of austerity. Since election regulations require equal television news time, suddenly he was getting the coverage which had previously been denied him, and has cut through the attacks and ridicule of the mainstream media which started the moment he was first elected Labour leader. The attacks continue but their blatant half-truths are getting easier to rebuff, and the images matter. People can see that while May looks glum and stiffens in the face of challenge, Corbyn is animated and relaxed.  (The contrast is obvious on social media, which is another imponderable, however, because of tribalism, confirmation bias, and all the scares about ‘fake news’. And obviously I’m judging by what comes up on my own feeds, and I don’t see the ‘dark ads’ which are targeted at people with the appropriate right wing social media profiles. How it works.)

Obviously the Manchester bombing is another imponderable. Many pundits suppose that such events strengthen the right, but this time they may be wrong. Corbyn is a straight talker, and took the first opportunity (when campaigning resumed after a 3-day pause) to speak the simple truth – the war on terror isn’t working – and to critique the foreign policies of military intervention in the Middle East which lie behind Islamism, which he has consistently argued and voted against as an MP. Naturally he was immediately attacked and condemned by the Tories and the right-wing press, telling half-truths about his alleged support back in the day for the IRA (always the wrong half, of course), but so far it doesn’t seem to have made a dent in his growing popularity.

Prediction is impossible. People are never objective about elections, your temperament affects your expectations and I’ve long learnt to be sceptical, despite the rise of new hope. But these are times of political turmoil and realignment. Another factor, for example, is the loss of the Labour vote in Scotland to the Scottish Nationalists, which it has been said rules out the possibility of a Labour victory under the current first-past-the-post electoral system. However, the Scottish Nationalists, observing the remarkable shift in the opinion polls, have now said that they would support Labour in the event of a hung parliament. A prospect which six weeks ago seemed like fantasy is now considered a possibility by the Scottish leader Nicola Sturgeon, a canny politician if ever there was one.

But there’s still ten days to go… Meanwhile, here are the two best campaign videos to reach me so far:

Captain SKA's "Liar, Liar" is officially released today. We have one week to get it in the top 40s, forcing the BBC to play it over the airways! Please download and share, share, share!!!!All money spent on downloads of the track between 26th May and 8th June 2017 will be split between food banks around the UK and The People's Assembly Against Austerity #LiarLiarClick on the following links to download:Amazon:https://www.amazon.co.uk/dp/B071LFC2P5/ref=sr_1_2?s=dmusic&ie=UTF8&qid=1495784350&sr=1-2-mp3-albums-bar-strip-0&keywords=Captain+Ska ITunes: https://itunes.apple.com/gb/album/liar-liar-ge2017-single/id1236890957Bandcamp: https://captainska.bandcamp.com/track/liar-liar-ge2017Spotify: https://play.spotify.com/album/23DVznuR9Hypo76oW8Bfre?play=true&utm_source=open.spotify.com&utm_medium=open

Posted by The People's Assembly Against Austerity on Freitag, 26. Mai 2017