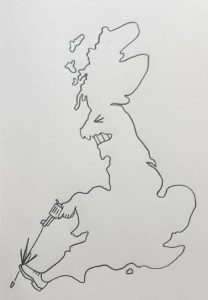 The mainstream media seem to have already decided. The Tories can’t fail to win. Labour is going to be routed. Yet Mrs May’s opportunist election call is a signal of her weakness in the face of Brexit, belated recognition that she has no personal mandate for the task. So it’s the right thing to do but for all the wrong reasons. (See this lucid analysis by Anthony Barnett.) She wants a single-issue election about Brexit, in order, she says, to strengthen her hand vis-a-vis Europe – the question is, to do what? Does she even know? Her poker face gives nothing away but the hand she’s hiding is a real bummer. Is she panicking because, as Paul Mason puts it, ‘she has triggered article 50 with no plan, no agreed negotiating position and a deteriorating economy’?

The media are about to have a field day, but what’s really at stake? Our economy or our humanity? After seven wasted years of economic failure under the Tories, the NHS is in crisis, schools are in crisis, prisons are in crisis, because funding has been cut back in the name of some elusive economic recovery, a smokescreen for privatisation by the back door. Pay is falling behind prices, millions of children are growing up in poverty, more people are using food banks, more people are homeless because of the housing crisis. Social provision is disappearing. People in need are not getting the care and support they deserve, not because of any fault of their own but because an inhuman system has been imposed which discriminates against them in the name of austerity. The world pictured in Ken Loach’s I, Daniel Blake. None of this has come about because of being in Europe, but belongs to the vicious agenda of unbowed neoliberalism digging itself into an ever deeper hole.

Jeremy Corbyn is right to lead the fight by attacking the entire Tory agenda. But we find ourselves in a situation where politics is out of sync. Labour has bucked the trend to become the biggest social democratic party in Europe, yet it’s trailing disastrously in the opinion polls. The polls are not exactly trustworthy, they sometimes predict the wrong result, especially recently. Many people see this as a sign of the instability that has overtaken the political system in the new post-2008 conjuncture right across Europe. Look at France, where established parties have been displaced by maverick candidates of right and left, and the upcoming first round presidential election is said to be too uncertain to call. Perhaps Mrs May doesn’t think there’s any comparison, but calculates that it would be advantageous to hold her own election in parallel while waiting for an uncertain outcome in France which could upset her European negotiations. It doesn’t matter what she thinks. Elections are always risky for incumbents, and can sometimes derail them. May has already made her first mistake by refusing to participate in television debates. Maybe an election will concentrate people’s attention and they’ll come to realise where their own, and if there’s any real patriotism out there, the country’s best interests lie. The polls also say that Labour policies – to end austerity and bring about structural changes to rebalance wealth and power – are overwhelmingly popular.

I’ve seen comments on Facebook urging tactical voting, and Mason calls for coalition and collaboration to stop Mrs May in her tracks. Apparently Gina Miller is organising an initiative to achieve this. The problem is the split opposition to Brexit mayhem combined with an antiquated electoral system. Now we’ll see if Momentum and social media campaigning will be capable of trouncing the political establishment, despite the self-reinforcing symbiosis between politics and the media which is detrimental to both, because the result is to concentrate attention too narrowly into well-worn grooves that only repeat conventional wisdom and cut off public comprehension instead of informing it. The hostility of the mainstream media to Corbyn is a matter of record (just google ‘mainstream media bias against Corbyn’). Perhaps the fairness requirements of television election coverage will help to right the balance. There are myths about Corbyn that have to be exploded, like his alleged unelectability and lack of perceived popularity. But the underlying problem is the oft-repeated piece of pundits’ wisdom, that the electorate doesn’t trust divided parties. The reason that Labour goes into this election at a disadvantage is the publicly acted out internal feuding of the past year which played so well in the media, as of course it was meant to. But it has left a bitter aftertaste which lingers in the low profile maintained by the parliamentary party. If Labour doesn’t come out of this well, it will not be Corbyn’s fault.

On Brexit, Labour has to demonstrate that what May intends, and isn’t likely to obtain anyway, is not in the interests of the citizen but of the transnational corporate and financial elite who were responsible for the current crisis, those true citizens of no country. It also has to argue for a whole different approach to Europe, which begins by agreeing with the 27 that European citizens should not be used as bargaining counters, and the rights of Europeans in the UK and Brits in Europe will be fully respected forthwith. It should also declare its opposition to the Great Repeal Bill in its present form, in other words the so-called ‘Henry VIII’ clauses to allow ministers to amend repatriated legislation without parliamentary scrutiny.

Mrs May entered No.10 by telling jammy lies: ‘The government I lead will be driven, not by the interests of the privileged few, but by yours. We will do everything we can to give you more control over your lives… we’ll think not of the powerful, but you… we’ll listen not to the mighty, but to you.’ Corbyn has often said he doesn’t do personal attacks, but it’s vital to expose Mrs May’s utter hypocrisy. It’s also necessary to nail a number of positions which are cropping up in vox-pops on the news, like the idea that because she’s started it, she should be allowed to finish it. The corporate media (including the BBC) will do everything they can to demonise Corbyn and the moderate but principled socialism he stands for. Their approach will be scatterbrained. Those vox pops have started by giving prominence to people declaring themselves sick of politics, as if the best way to defend the status quo is to reinforce people’s disenchantment and hope for a low turn-out. This election is much too important to let this happen.