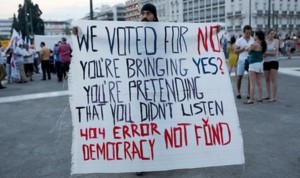 Since getting back from Athens, we’ve been hard at work editing the next episode of ‘Money Puzzles‘, our film project on money, debt and the fightback against austerity. To reflect the dire situation in Greece after the government, despite the overwhelming No vote in the referendum of July 5th, caved in to the masters of Europe, we’re calling this new episode ‘Greece, Europe, Undemocracy’. We define ‘undemocracy’ as ‘a condition found in democratic countries when democracy has been denied’ (see also ‘democratic deficit’)’. Like our previous filming forays, we shall release this as a free-standing short, to be later incorporated into the finished film.

Making films is a bit like constructing a jigsaw puzzle. Fiction generally begins by drawing the picture – that’s the script – then dividing it up into separate pieces and finally putting them back together again. Although the end result may differ from the blueprint that is the script, documentary is different in another way, because there’s no script. The picture you start with is a fuzzy one, you find the pieces as you go along, they have funny shapes and it’s a tricky business of trial and error putting them together. This is what Michael’s been doing since coming back from Athens, tossing the results back and forth with Lee until it’s there.

When you return from the field and sit down to edit, time changes pace. Daily life proceeds in the background, and you follow the news (being a news junkie), but your head is back where you’ve just been, suspended in that particular moment replaying in front of you as you start cutting it up. Nevertheless, we’re aware that the pace of events in Greece has also altered. For one thing, it’s no longer in the headlines. The fatal consequences of the cave-in to Brussels are now taking their course – VAT in restaurants went up even before we left for home. The Athens government has retreated, its hands tied behind its back, while an internal debate is taking place within Syriza of which the outside world knows little and cares less, unless, that is, to demonise the left platform and dismiss the continuing arguments for euro exit – which several people we spoke to thought was still possible as the deal with Brussels could yet break down.

Meanwhile the European headlines are now preoccupied with the migrant refugee crisis which the EU completely refuses to handle, another sign that the unwieldy entity of Europe has become dysfunctional. As for Greece, being one of the front-line states for refugees crossing the Mediterranean or the Aegean, the government has been robbed by paralyzing austerity measures of capacity to help the thousands arriving on its shores, and the job is being done by solidarity groups whose ‘selflessness and dedication’, says a foreign aid worker, is ‘awe-inspiring’.

The solidarity movement grew out of the occupation of Syntagma Square in 2011, in the upsurge of mass protest against austerity that also exploded in Spain – while the Middle East was engulfed in the ‘Arab Spring’. A coordinating body, Solidarity For All, now has 350 member associations. We filmed one of them, a food distribution centre at Mandra on the outskirts of Athens. Its manager told us that they had also sent food abroad to communities in need of humanitarian aid, like Gaza and Kobane. 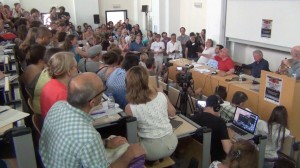 The main focus of our filming was an international left conference, ‘Democracy Rising’, organised by Creston Davis of the GCAS. The conference drew a list of distinguished speakers (with a predominance, unfortunately, of men), and a great variety of papers by academics and others, including activists from several countries, who made up a public that packed the hall where the plenary sessions were held. 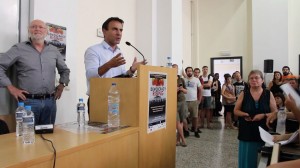 Several of the speakers make brief appearances in the film, which foregrounds the session where Costas Lapavitsas, economist and Syriza MP, made a powerful intervention, arguing that the only politically consistent thing Syriza can do is withdraw from the terms imposed by Brussels, nationalise the banks and exit the euro. You will see in the film the dramatic effect of his words. Suddenly all the tensions of the moment – at the end of the week that began with Syriza’s leader Tsipras officially backing down – boiled over and exploded, as decorum buckled beneath shouts and cries from all over the hall.  But then the film returns to Mandra, and the quiet solidarity work which comprises a different, more immediately practical form of politics, which is not just found in Greece but is also very strong, for example, in Spain – we shall film there later this year. 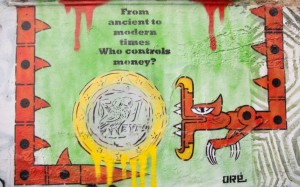 How do these scenes fit in with a film about money and debt? As Paul Mason said at the conference, debt is coercion. At every level, debt is a control mechanism. In a ‘home owning democracy’, servicing debt is what most people spend most of their lives doing. In several supposedly advanced such democracies, this now includes student debt. (But remember the crash of 2008 originated in the debt bubble of subprime mortgages. Unrepayable student fees are now generating another debt bubble, with even the government estimating a default rate in the UK of at least 45%.) The question of household debt already came up in our earlier film from Greece, ‘Greece on the Edge?’ Move up a couple of levels, and we see in Greece how debt is the control mechanism that locks the relations between states in place, governed by international bodies such as the IMF, and very clearly in Europe, the international banking system whose interests are served by the supposedly independent ECB.

The episode on Greece also shows how these debt relations pollute human societies, how they atomise and dehumanise us. Relations mediated by money lack all morality and become unreasonable because money is a medium of power, and what we hear in official pronouncements about austerity is that we are compelled to service international capital. But there is an alternative. Lapavitsas is one those in Syriza’s left platform who argues for exiting the euro, and at the conference outlined a plan for doing so, which begins with nationalising the banks. No one doubts that euro exit would involve pain, but Lapavitsas argues that the economy would recover by taking up the slack created by the last five years of misguided austerity. 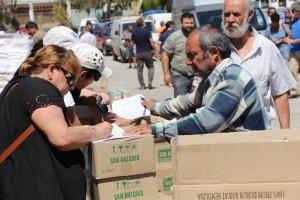 Then there’s also the lesson of Mandra and the solidarity network, where money is scarce and volunteer labour steps in. There is much to explore in this, but what we saw in Mandra is that ordinary people clearly have the capacity to organise production for their own needs, indeed more effectively than the corporate dominated capitalist market.

We are now moving on to discover what happens when a country defaults – the case of Argentina, which Michael visits in September – and then to Spain in November, in the run-up to the general election which will test the new politics of Podemos and the solidarity networks; in between, we’ll also be filming in the UK.

There are lots of people helping the project in the tasks of production. Please offer us your solidarity by making a donation – however small – to our crowdfunding at  Indiegogo.