Two weeks after the referendum in which the Greek people delivered an overwhelming No to Austerity, one week after the Syriza government nonetheless accepted the terms dictated by Brussels, many people in Greece feel either betrayed or confused or both. I’m in Athens with Lee Salter to film an episode for our new film, Money Puzzles, and attend an international conference called, hopefully, Democracy Rising, where some of the best brains of the academic left from Europe and North America have been trying to grapple with the contradictions which these unexpected developments have now thrown up, and relate them to the broader canvas of the anti-capitalist social movements that have emerged in the last few years around the world. It is not an easy brief, in part because of a degree of disconnection between the academic language of many of the panellists and the political need for plain-speaking. This disconnect is also part of the political blockage of the left that we all need to learn to overcome. We need to speak simple truth not only to power but also each other.

The mood in Athens today is rather different from only a few weeks ago, at the moment of my previous visit in May, when people seemed pretty laid back, patiently enduring the waiting game as their then largely trusted government, elected in January, continued the back-and-forth between Athens and Brussels without any positive results. There is still no agreement on why Tsipras called the referendum, or what result he expected, or what he hoped to achieve with it, but it appears from what former finance minister Varoufakis has written since he resigned immediately after the referendum that he at least understood that Brussels was too much under the grip of German intransigence to ever agree on anything with a government whose democratic legitimacy they simply refused to acknowledge. There were others happy to follow their lead. There is no room for democracy in Brussels. 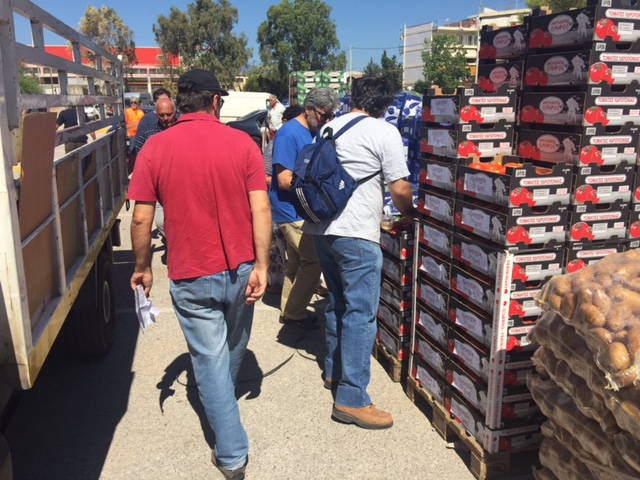 However, largely below the radar of the mainstream foreign media a huge solidarity network has grown up to provide food, medicines and other forms of support for those in need, largely organised through Solidarity For All. Many of the volunteers who run these centres are themselves unemployed, some are pensioners. At a food distribution centre (pictured above) at Mandra on the outskirts of Athens, one of them tells us he is collecting supplies for some forty families in need in his neighbourhood. Another, a 65-year-old volunteer, an educated man with excellent English, tells us, very calmly, that he has never been so angry in his life. The current situation takes its toll in many different ways. For the youth, it is not only the difficulty of finding a job – in other words, of entering the precariat – but psychological disruption. Back in the city centre, a young aspiring filmmaker embarks on a muddled and lengthy rant which testifies to an existential crisis brought on by the political twists and turns that induce confusion. ‘Everything has become so meta,’ she says.

Syriza is what Tony Benn, speaking of the old Labour Party, called ‘a broad church’, with a leftist faction (which Tsipras has now removed from his cabinet). One of its clearest thinkers is Costas Lapavitsas, who returned to Greece (as did other foreign based academics) from his position as a London-based professor of economics where he acquired a reputation for his analysis of the process of financialisation that forms an integral part of neoliberal doctrine. He is also a long-standing advocate of Greece’s exit from the euro, which now appears the only move that would allow the country to renounce the unpayable national debt imposed on them by the troika, and which the preliminary report of the Greek parliament’s debt audit committee judges to be very largely illegitimate. But even with political will this can’t be done overnight, it needs planning and preparation which (as Varoufakis has pointed out) it would be difficult to keep secret, because if such plans leaked out, they would become a self-fulfilling prophecy. The first step would have to be the radical move of nationalising the banks. Do that, and there would be no turning back. Lapavitsas knows very well that the first effects would be to hit the economy – that’s to say, the populace – very hard indeed, but argued in his powerful intervention at the conference that a new drachma would also stimulate domestic activity that would take up the huge amount of slack that austerity has created in the national economy. (Argentina, albeit in a different context, is an example of a country that defaulted and yet whose economy recovered rather quicker than sceptics predicted. We shall be going to film there in September, before going to Spain in the run-up to the elections there before the end of the year.)

The majority of Syriza, however, mindful that the majority of the Greek electorate, while rejecting austerity, nonetheless wants to stay in the euro, is therefore not persuaded. Here one sees the perennial problem of institutional politics. The political party that constitutes the operational form of representative democracy serves to discipline political activity and close off options, whilst what is happening on the streets and in the solidarity networks is pushing in a different direction. Syriza is caught in the middle. Part of the funding for the food distribution centre, for example, comes from Syriza MPs who pay a voluntary levy on their salaries. But while they support solidarity, Syriza has yet to see these networks as the germination of a different form of socio-political organisation, which operates outside the dictates of the market so that profit disappears, but which could also serve as a testing laboratory for a alternative politics which could break with the vertical relationship of party to electorate and allow both Syriza and the Greek people not only to weather the storms of austerity but build a new kind of politics. This of course is also beyond the ken of the international journalists (with one or two exceptions).

Our film enters this space and locates it in a broad international context, by questioning not only the lies of austerity but also the misconceptions about money and debt which continue to govern the mainstream media. We work from an academic base but against the grain. The funding we’ve managed to assemble so far remains minimal, and we have therefore turned to the new form of crowd-funding which the internet has now made possible. We plead with all our friends to go beyond the ‘clicktivism’ of the ‘like’, to turn your clicks into real monetary support – even if you can only afford the smallest amount. We are encouraged by people who tell us they like our previous film together, our documentary on the City of London, Secret City, and urge us to make the next one, but we need this to be translated into a little cash. To do so, please go to our Indiegogo page, where you can also see the film on Greece we shot in May, Greece on the Edge?