‘Secret City‘, the film I’ve made with Lee Salter about the City of London Corporation, received a preview screening at the House of Commons on Tuesday evening. This is more or less what Lee and I said to introduce it.

First, our thanks to John McDonnell, MP for Hayes and Harlington, for hosting the event. 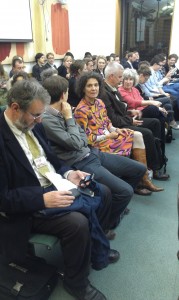 We think this film is a model of documentary film production within the academy under the rubric of research as practice. One of the things this means is that it’s been produced on a tiny budget, less than £10,000, which represents real value for money. So we’d also like to acknowledge the support of the University of Roehampton, which provided most of this funding, which mainly covers the costs of clearing rights for archive footage.

Why a film and not a research paper? Because we wanted to reach outside the academy with a piece of work that deals with something very few people know anything about, and a documentary film is a very good way to do this because it breaks out of the limits of any particular discipline and reaches audiences in the wider community.

Despite the tiny budget, we like working under conditions of academic freedom. It means we don’t have to conform to the conventions of broadcast television, under which this film would probably be considered to be unbalanced and maybe partisan. But we think that the constraints of television are often too restrictive to properly inform the viewer, especially when the experiences and knowledge of the people in the film are at odds with the conventional wisdom.

A number of years ago I made a film about the rise and fall of the city of Detroit. Going back there to show the finished product felt a bit like playing Daniel in the lion’s den. There’s an element of this in screening a new film about the City of London in the House of Commons, where people know more about its power and influence than do most of the population. But it’s also different. In the case of Detroit, my nervousness was due in part to being an outsider, whose vision of the city could be dismissed by those who didn’t want to listen. This film, however, is about my home town. It’s the work of a Londoner born and bred—and first generation English to boot, like the Labour leader (and for similar reasons)—who thinks it’s high time that we reclaimed the city for the marvellous diversity of ordinary people, because that’s who constitute London’s real riches.

2 Responses to Screening at the House of Commons