A remarkable discussion has taken place on Meccsa, an academic mailing list for media, communications and cultural studies, sparked off by my previous blog, Behind the News from Gaza. With more than 150 messages in three days, very little of it had anything to do with what I actually wrote, and I’ve no complaint about that—it’s just one of the dynamics at work on the internet, and that’s what made it so interesting. The discussion was kicked off almost immediately by a doubting response from a list member in Israel, which gave me the feeling that she hadn’t read the full blog on Putney Debater but reacted impulsively to the snippet which appeared on the list. Thirty-six messages later, a correspondent posted the information that Elina Bardach-Yalov is listed on Linked In as a former Political Communications advisor for Prime Minister Benjamin Netanyahu. This didn’t stop her continuing to respond (she sent 26 posts in three days!). (Download a digest of the whole discussion here.)

Early on, another list member posted a link to a newspaper story about a secret report by Republican pollster Frank Luntz entitled ‘The Israel Project’s 2009 Global Language Dictionary’,  for use by those ‘on the front lines of fighting the media war for Israel’, and long ago leaked to Newsweek Online. In my original post, I already mention that Israel has a specialised unit for intervention in the social media, but omitted to give links. In fact there are several reports, including this one in the New York Times, about organised internet ‘Hasbara’, literally ‘explaining’, which the newspaper calls ‘a Hebrew euphemism for propaganda’. A report on The Electronic Intifada includes a Hebrew-language video showing ‘rows of students beavering away at computers in a hall with a sign on its door saying “Advocacy Room” in English. In Hebrew, it says “Hasbara war room.”’ Working in 30 languages at a centre hosted by a student union in a private university in Herzliya, some 400 student volunteers target online forums, Facebook pages and comments sections in online media, with the crudest of texts, images, gifs and videos. 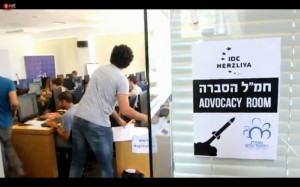 Has the Meccsa list just been had? Bardach-Yalov isn’t a student—indeed a quick search reveals that she has a PhD in Strategic Communications—and in a late message she denied she was being paid, but it’s difficult to believe that she isn’t part of this organised effort. One therefore cannot be sure that she is speaking entirely with her own voice, however personal she makes it sound. The tone and content of her strategic communications to the Meccsa list, considered in terms of discourse analysis, closely follow the prescribed line. As another list member put it, she was ‘very good at following the Israeli project’s 2009 Global language dictionary of acknowledging tragedy and then blaming Hamas for everything’. But not very good at convincing anybody on the list, even before she was outed as a long-distance propagandist.

For my part, I was first of all amazed at the speed and intensity of the whole debate. It evidenced the same thing I’d seen, as I said in my original post, on my Facebook feed, namely the striking degree to which everyone everywhere has been exercised by the suffering in Gaza, the gross injustice which the mainstream media cannot disguise. What the social media (of which an academic email forum is a sub-genre) is very good at is short concentrated bouts of attention on issues bubbling just under the surface of everyday life, where the mainstream media respond to events with a preformed ideological agenda which they are constitutionally unable to satisfy. As Siegfried Kracauer once put it, speaking of the illustrated press, they present the public with a world whose perception of it is hindered by the illustrated journals themselves.

In these circumstances, the first effect of the long-distance propagandist’s intervention was to unleash the disquiet and anger generated when Israel started  indiscriminately killing and wounding Gazans, including large numbers of children. When the Israeli academic repeatedly denied the evidence and the figures, and then turned out to be a propagandist, the list felt angry at being subjected to political infiltration. As an example of 21st century digital propaganda, you would have to say that it has failed, because thankfully the collective intelligence of such a forum cannot be deceived so easily: it demands that positions and arguments are considered and answered, not avoided and refused; not responses along the lines of ‘I could provide details here, but…’  which follow Luntz’s dictum ‘Don’t confuse messages with facts’. Said another contributor, ‘The Israeli media propaganda campaign may well work for those who are uninformed about the facts on the ground but it will be incredibly hard to sell for media academics and intellectuals.’ (Pity about the metaphor of selling.) It is beginning not to work so well in the wider arena either. A post on the third day reported that according to the latest opinion poll a majority of people in Britain now consider the measures the Israeli state is taking excessive, and both Israel and Hamas are guilty of war crimes, while even the British Foreign Secretary has said that Israel is undermining its support in the west. As a Cambridge professor once put it, propaganda doesn’t work: it fails to convince your enemy, while not quite persuading your friends. There are also reports of a growth of antisemitism in the west, as a direct outcome of these events.

The long-distance propagandist didn’t help herself by resorting to unwonted sarcasm, to which some list members responded with personal criticisms which occasioned censure from others. While following the to-and-fro, I inevitably saw a manifestation of something else I said in the first blog, when I quoted a post by a Jewish friend on Facebook: ‘I have found that Zionists generally are quite delusional and like other such people (born again Christians, Muslim fundamentalists, Ukip or Tea Party supporters) not the least bit open to consider any views which call into question their “core” beliefs.’ This was echoed by another list member who wrote that ‘what we are repeatedly getting from Dr Bardach-Yelov, and which is threatening to run a very valuable debate into a cul-de-sac, is the product of what appears to be a totally closed mind and an expression of exactly the same bunker mentality as that of the Israeli politicians that we encounter every day in the British media. I would suggest there is no more point in trying to engage such people in a sensible, rational debate than there is in trying to persuade the flat earth brigade that the planet is in fact round.’

The list was not of one voice; certain tensions appeared. Some people attacked the propagandist as racist, others defended her right to be heard. A few people began to complain of the welter of messages, and on the second afternoon, the List Operations Manager announced that the discussion was going off-topic, people were engaging in personal attacks, and everyone was asked to cease discussion on the thread immediately. What happened then was telling: she was immediately reprimanded by several discussants for attempting to cut off a vital exchange on a topic central to the raison d’être of the list—and the debate continued.

Perhaps the List Operations Manager didn’t realise that the person whose posts both stimulated and sustained the whole debate was the long-distance propagandist herself, who finally seemed to sign off late Thursday morning, doubtless exhausted. There was not much more mileage to be had anyway, but what is interesting is that by this time the debate had shifted to questioning the role of the list itself.

Some of the censure in the later stages of the discussion was addressed to people who complained about the huge number of posts and asked to unsubscribe, a complaint rapidly reprimanded by others. The way to unsubscribe, said one, because you object to the volume of traffic, is ‘not by adding to that traffic and telling everyone on the list that you wish to unsubscribe, but to follow the instructions (or spend two seconds on google to find the instructions)’, to which another added that ‘it just requires a bit of media literacy, which should be a default element of know-how for media and communication specialists’.

Others expressed serious misgivings. For example: ‘…it seems to me shocking that there are any media scholars whose reaction to a relatively rare moment when MECSSA’s mail-list has had some real connection to matters of current (urgent) political importance, is to threaten to unsubscribe…What are we for if not to active encourage and participate in debates like this.’ And another: ‘As a cultural studies scholar I do not wish to see my professional life as something entirely separate from day-to-day social and political concerns and the impact of world events. It’s been eye-opening to see how differently people can feel about this.’ And one more: ‘The announcement of the intention to unsubscribe, rather than actually doing it, is in fact part of the debate. What is really being announced is the request for others to stop talking about what is happening in Gaza and the inadequate media coverage of it. Remaining quiet while crimes against humanity continue is to promote a very particular politics.’ The last contributor gave this particular politics its name: quietism.

Was the Meccsa list had? Yes, but for the lonely long-distance propagandist, the effort was a failure, and in this academic community at least, Zionist propaganda has been roundly exposed, and Israel stands condemned.