A more interesting question to ask after his death is not what Fidel Castro was – a revolutionary hero? a tyrannical dictator? a beneficent dictator? – but who would now call themselves a Fidelista and what will become of Fidelismo? The Havana where I arrived the day before his burial at the other end of the island was certainly subdued, but how to interpret the silence that the TV news bulletins during the previous week had all remarked on? It wasn’t just that the authorities had banned music and alcohol during the mourning period. An old friend of my own age ruminated: ‘People were silent’, she said, ‘because they didn’t know what to say.’ Or as a new friend, an equally thoughtful young woman of 26 put it, ‘He already wasn’t there.’ This doesn’t mean that Cuba is no longer his, the proud defiant island nation that solidly backed the creation of a Caribbean-flavoured socialist state against all odds. Other millennials I spoke to – young independent filmmakers, often film school graduates but working outside the system making highly personal works – would hardly call themselves Fidelistas, but they were offended, they said, when hard-liners referred to them as ‘the enemy’. But they readily expressed their respect for the Fidelismo of their parents, even if they tend to see his brother Raúl Castro’s governance as something like a holding operation struggling to keep control. In short, it is still Fidel’s Cuba, and I was put in mind of some lines from W.H.Auden’s ‘In Memory of Sigmund Freud’:

if often he was wrong and, at times, absurd,

I was in Cuba to attend the Havana Film Festival, invited to join in a colloquium to celebrate the memory of Julio García Espinosa who died earlier this year, and to join one of the festival juries, for Opera Prima, or first feature films – that meant watching 18 films in seven days, so I went a few days early to meet with old friends and young filmmakers, in short, people across the generations. One notable difference between generations is that so many older people experienced Fidel’s extraordinary charisma directly, in the flesh. Not only at the enormous rallies where he practised direct democracy in speeches of great length, but also in his constant sorties across the island, engaging with people everywhere. You have to be in the physical presence of the charismatic figure to feel the magnetism of this mysterious quality – listening to a four-hour speech at a rally in the Plaza de la Revolución in the early 1980s (I was grateful that as foreign guests we were given seats); seeing him walking through the reception at the end of the Havana Film Festival talking to people (me included once for about a minute); and the next year, filming him speaking at the Festival’s closing ceremony. When I look at the snatch of the speech in the film that I made with Holly Aylett about the Film Festival, Havana Report, I am aware of seeing an animated figure with a seductive voice, a big man who commands the space of the film image, but also that this is a mere shadow of the man, and I have to contest, contrary to the fake charisma of consumerist popular culture, that real charisma is a quality of presence that escapes the camera. But images are all that the youngest generations have to go on: the now entirely iconic multiple image of a legend, the pictures endlessly transmitted on television during the days of mourning, silently playing on the sets hanging in the corners of the cafes where people sit drinking beer or coffee. 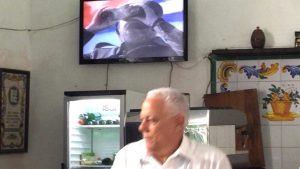 No-one expects Fidel’s physical demise (the official phrase) to produce any significant change, and everyone seemed resigned about Trump. What comes, will come, including the tourists, mostly from the USA, many of them elderly and rich beyond Cuban aspirations, now thronging the expensive hotels and the touristy parts of the city. But there is concern for couple of things. One is the problem of the local ‘new rich’, a small enterprise sector called into being by Raúl’s economic reforms. Part of the problem is that they operate within a dual currency system (US$1 = 1 Convertible Peso = 25 Cuban Pesos), a lopsided arrangement which generates a black market and is due for reform, announced but not yet implemented. Some are adept at manoeuvring through the loopholes in a civic culture which isn’t used to taxation. This is a complicated issue which cuts more than one way. For example, there’s a newly introduced tax on income – graduated but very low, 2 or 3 or 4 per cent, collected by the Province rather than the State. But what happens when a waiter in a paladar (a private restaurant) is employed as casual labour on a verbal agreement rather than an employment contract? No matter that you can find plenty of casual work everywhere else, it’s not a good state of affairs if you want to straighten out your hobbling economy, and avoid corruption, large or small.

The question of money drew my attention because another reason for being there was to show Money Puzzles at the Havana Film Festival. This was always going to be a curious experience. The Festival audience is made up of both Cuban and Latin American cinephiles, who have different perspectives on the question of money. For visiting Latin Americans, the landscape of globalised financial capitalism is familiar territory, notwithstanding the film’s European focus. For Cubans, however, the premise of the film is outside their experience: there are no private banks, no source of official financial loans, people aren’t in debt. But changes are beginning. Prensa Latina recently reported a trial in the city of Trinidad whereby bank loans are being introduced to stimulate agricultural production. An economic transformation is in process and the difficulties are immense. The prospect of a collapse of a country’s monetary system if things go wrong is frightening to contemplate, as the chapter on Argentina in Money Puzzles shows. I recall the astute observer Ignacio Ramonet a few years ago quoting a remark of de Tocqueville’s to the effect that the most critical moment for a government is when it begins to reform. No wonder the Cuban government is playing a slow and cautious game.

The emergence of a new petty bourgeoisie is also manifest in what another millennial I spoke with called the ‘new right’. On questioning, this turned out to be less dramatic than it sounds. Nothing to do with the new right in Europe or the USA, but more like social democrats who believe in free education and public health combined with private enterprise. Foreign commentators who get a whiff of this construe it some kind of opposition, but this implies too much, and it isn’t politically organised.

No more so are those who complain about the lack of transparency in the government, which, Cuba being a one-party State, also means the Party. Another friend of the older generation, a usually well informed intellectual, said he had no idea why the Minister of Culture had been removed from his post earlier this year. For people working in cultural fields, this is life as normal. The ruling echelons seem closed off, and in awkward fields like culture, inclined to play possum. In 2013, in response to an announcement of plans to ‘re-structure’ the state film institute, ICAIC, filmmakers of both the ICAIC and the independent sector formed an action committee to demand a comprehensive new approach to the whole audio-visual sector. Among their concerns was the anomalous status of the independents, neither legal nor illegal, and without access to appropriate support. A series of meetings took place, but here we are, more than three years later, and there is no movement. The fellow selling pirated DVDs on the street stall is a cuentapropista, legally self-employed, but some of what he sells is made by filmmakers who do not enjoy the same legal status. This makes them unhappy, because they want to be legit. It isn’t the film institute’s fault, who support them as far as they can, including hosting an annual Muestra de Cine Joven, or Exhibition of Young Cinema.

But the street stall cuentapropista also faces competition. In the absence of good internet connections, there is el paquete – a hard disk distributed weekly with a terrabyte of stuff downloaded from the internet, including foreign TV shows and movies, from which people select what they want to offload onto their memory sticks. No-one seems to know where it comes from or who’s running the business, but it’s evidently tolerated by the authorities. 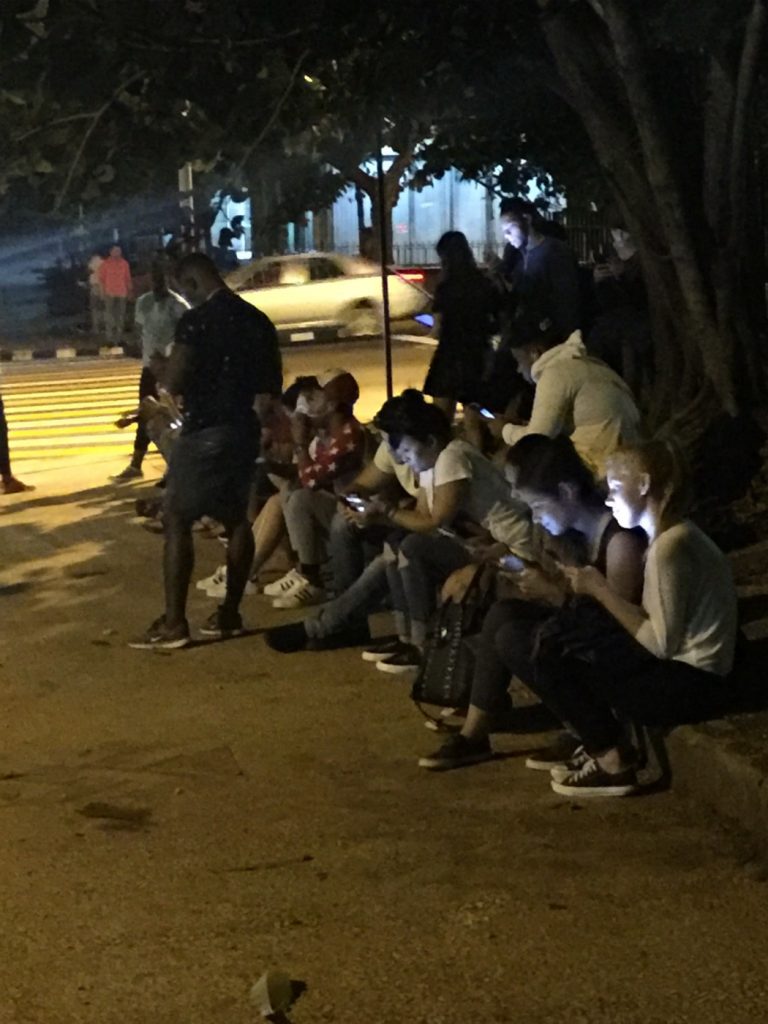 Some of the forces bringing cultural change to the still beleaguered island are visible on the street, like the youth gathered in parks and on street corners for access to public wifi (you have to buy it from the phone company). But there are also undercurrents which remain invisible to journalists from abroad and columnists back home. Between the oldest and youngest generations in Cuba are those who were born in its early years and grew up within it, living its highs and lows and not just surviving but enjoying opportunities created by the Revolution, especially among the intelligentsia (I had no time on this visit to get around and talk to other folk). This generation still has an intense relationship to Fidel. Speaking of the effect of his death, ‘I didn’t cry,’ said one such friend, ‘but I was emotionally churned up.’ It’s a generation that takes great pride in the riches of contemporary Cuban culture, and deplores the blinkered attitude of the party-state, whose latest blunder was forcing the ICAIC to withdraw a new independent film from the film festival, Carlos Lechuga’s Santa y Andrés, which has already been seen abroad at festivals including Toronto, Chicago and San Sebastián. The issue became subject to public comment two days before the Festival, at the launch of the 200th edition of the ICAIC’s house magazine, Cine Cubano, when Fernando Pérez made the presentation. Going through the issue article by article until he got to the inside back cover, which carries an advert for the film, Fernando spoke with all his authority as Cuba’s most respected director to call the film’s suppression quite unacceptable. After that, lots of people referred to the matter, and thought it a stupid decision. Apart from giving the film publicity, they joked that no-one in Cuba had yet seen the film in question but they soon would, because it was sure to turn up on el paquete.

The paradox, then, is that while the politicians dither, and the official media mostly stay ‘on message’, everyone talks freely and openly about this, that and the other. It becomes clear that the criticisms they articulate come from a leftist position which is not looking to abandon socialism for the free market but laments the limited realisation in the current dispensation of open dialogue with civil society. More democracy, if you like, but of a socialist kind. (Dare one say glasnost as well as perestroika? Does this have to lead to collapse?) A 55-year-old member of this generation from the interior of the country, visiting the capital for the film festival, assured me that this was a widely held position, and went on to say he thought there could well be a resurgence of Fidelismo in the coming period. But this was late at night after a very full day, after eating a late-night supper on the terrace of a paladar, and I confess I was too tired to delve further into the question of what this posthumous Fidelismo might consist in.