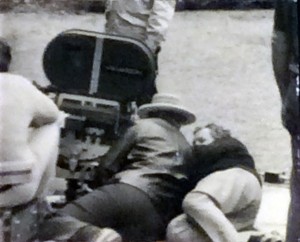 This is how I remember Richard Attenborough—setting up a shot for Oh! What a Lovely War, in a photo I took myself. He’s the one in the hat. The news of his death takes me back to where I started, because that first film of his as director was also the occasion for my own first effort at filmmaking, and I’m eternally grateful to him for the chance (rare in those days) to have made a film of the filming.

Oh! What a Lovely War was shot in Brighton in 1968, and recruited extras from students at Sussex University. Although I was approaching finals, I jumped at the opportunity. An encounter on the second day of the shoot with the film’s uncredited producer, the writer Len Deighton, led to the unexpected offer—which was Deighton’s idea—and a few days later there we were, four of us, equipped with an old wind-up Bell & Howell 16mm camera from the film’s publicity department, informally engaged on ‘the making of’.

We were a bunch of four highly inquisitive students. We watched every aspect of the crew at work, from make-up and props to camera and sound. In their idle moments, they taught us how to use our equipment, and then how to use theirs. Everyone praised Attenborough for his unusual approachability, which was reflected in their availability towards us. We were dubbed ‘the third crew’. Like everyone else we called him Dickie—and he addressed us, the same way he did everyone else, as ‘darling’. He was a figure universally loved by the entire crew and by a stellar cast who had happily agreed to appear in cameos at his behest. Part of our education was watching Attenborough working with actors like Laurence Olivier, Dirk Bogarde, John Mills and so many more of his peers.

Dickie held open rushes screenings at the end of each day in a temporary viewing theatre in the basement of one of the big seafront hotels, which he invited us to attend. More than that. On the days when we did some filming, our rushes went off to the labs with theirs, and he screened them the next day after his own—a nerve-racking experience, but he affably put us at our ease. The feedback he elicited on our behalf was immensely encouraging and instructive, and we must have done well enough, because towards the end a sync camera outfit was hired in for us for three days, and we were rapidly taught how to operate it—by one of Britain’s top camera teams.

Then a Steenbeck was hired in for us to edit, and I learned something else apposite from Attenborough when I went to visit him in his own cutting room. He was much more reflective than he was on set. Not what you would call an intellectual in the high-brow sense, but a man of deep feelings and convictions, in the cutting room he mused on how film-making was really a double creative process—the first stage is shooting the film, the second is editing, when you have to go back and put it together again. And so I did.

There was another lesson I would learn, not from Attenborough but about the industry. Our film was never quite completed. Attenborough and Deighton agreed that we should aim for a 30 minute documentary which would end with a clip from the completed movie. But just as we were finishing, we were called to a meeting with Deighton and a lawyer. The movie had been funded by Paramount, who were concerned at it going over-budget, and one of the things they accused him of was spending the entire publicity budget on having a bunch of students running around filming stuff. They now requested that we deliver a ten-minute ‘featurette’ which they would use to trail the movie in America. But this was 1968, and we were not inclined to be compliant. We stuck out for what had been agreed and refused. We wanted to enter the film in a student film competition, and it was Attenborough who gave us the money to finish it from his own pocket. But alas, it was too late, and we missed the closing submission date. Meanwhile, Deighton took his name off the credits of Oh! What a Lovely War, and later the only copy of our own film got lost.

The whole experience was like a highly intensive apprenticeship. When I began to write about cinema some years later, it was this experience on which I would model my understanding of how film production ideally works, the kind of creative labour and collaborative group psychology involved in making films. What more can I say? Just: Thank you, Dickie, for one of the most formative episodes of my life.

This entry was posted in Film matters, Miscellany and tagged Film. Bookmark the permalink.