A small but fascinating interdisciplinary workshop at the University of Leicester on March 6th, on the theme of environmental justice in Latin America, convened by Paula Serafini, proved a congenial occasion for a screening of ‘Cuba: Living Between Hurricanes’. The event, which focussed on cultural production in response to environmental injustice, was  slightly depleted by two or three non-arrivals due to understandable reluctance to travel from abroad; two of them gave their contributions via internet – is this how things will shape up in the foreseeable future?

What made it so engaging was the variety of presentations about a diverse range of cultural manifestations – street theatre, performance, music, textiles, video – and of phenomena susceptible to cultural intervention – conservation in the Colombian paramo, potato cultivation in the Peruvian Andes, conflict over pulp mills on the Uruguay river, shareholder meetings in London. A couple of presentations found me thinking back to the beginnings my own involvement in Latin America in the 1970s. Olivia Angé, for example, prompted recollections of the amazing variety of potatoes I ate in the Bolivian Andes in 1973 (apparently there are more than 1300 varieties!). 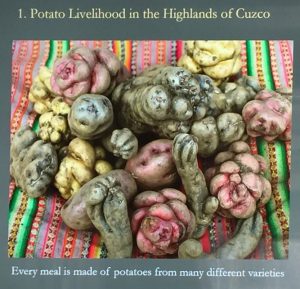 Her project for a subversive catalogue of potatoes grown in a conservation area in Peru is about how to engage in cataloguing practices that would not reproduce Western modes of classification and value. She told us about urban prejudice against knobbly varieties, and of the effects of climate change as cultivation moves to higher altitudes.

Then Anna Grimaldi took us back to cultural expressions of international solidarity with Chile following the military coup in 1973, and spoke of the passage from a discourse of state violation of human rights to a more expansive and inclusive discourse encompassing minorities, environmental justice, and questions of sustainable development. I was able to mention the work of the Cultural Committee of the Chile Solidarity Campaign, where I learned so much about cultural politics from the Chileans who came to the UK as refugees – a good number were MIRistas (the MIR was an extraparliamentary party on the far left) and cultural activists, including actors and musicians. I quickly fell into film activism, taking films to screen around the country, and curating a retrospective of the cinema of Popular Unity at the National Film Theatre in 1976. Chilean cinema had already become a creative force within the New Latin American Cinema movement before Allende was elected, engaged in rediscovering the country’s social reality. These included an anonymous documentary short of 1971 on the indigenous Mapuche (alternative title: ‘Natuayin mapu’), perhaps anticipating the turn that might have come earlier if it hadn’t been brutally cut off. Chilean cinema remained a force after 1973: dozens of Chilean filmmakers in exile made something like 140 films of all types over the following ten years, initiating what Hamid Naficy would later call ‘nomadic cinema’. Jump to the new century, and the discursive turn that Anna spoke of was well in evidence by the time of the huge student movement for educational reform of 2011, which began with ecological protests at the start of the year –

as recounted by a student activist in ‘Protest Chile’, the video I shot there later that year.

Aiden Jolly, a musician and activist involved in protest performances in the UK over several years under the banner of the Threepenny Festival [threepennyfestival.org], brought it all home by asking how artist activists working in solidarity with indigenous peoples relate to each other across cultural difference, and how to manoeuvre the exchange of knowledge, skills and methods between indigenous peoples and their allies in the metropolis. A recent example can be found on video: an intervention outside the AGM of the multinational BHP Billiton, handing out a spoof mineral water product, Agua Vida, which called into question the corporation’s claims to be safeguarding water supplies in areas of extractivist operations in Colombia and Brazil.

This made me think of the inventive actions carried out by UK Uncut ten years ago, like the occupation of banks that for a couple of hours were symbolically turned into public services like a library or a creche, and in one case, a stand-up comedy club, which I filmed in early 2011: a type of carnivalesque direct action as street theatre well suited to a diversified media ecology which at every level, both broadcast and online, responds to performative spectacle, and thus inscribes the issue in public debate. (In recalling this video in the present context, I am struck by the contrast with the Chilean student movement the same year, which also engaged in protest performance, on a massive scale. In the UK, with the focus on the imposition of austerity, environmental issues were not then in evidence.)

All such iconic protest involves various challenges and problems, beginning with the ideological framing imposed by the media gatekeepers as they report them; to counter this, cultural activism needs to use social media to mobilise continuous response. Video plays an important role here, although video activism struggles against the overwhelming flood of trivia and misinformation that the social media trade on, remaining marginal to consumer culture – but that, of course, is also its strength.

Meanwhile, as Aiden pointed out, this type of small scale but targeted action raises critical questions about the privileged position of the Western activists involved, with their cultural know-how and access to erudite knowledge, which in turn is ideologically shaped by the deep prejudice of Western culture against indigenous forms of knowledge. This is not a matter of self-flagellation on the part of Western intellectuals, but recognition of a prejudice rooted in the Western split between mind and nature, which disparages indigenous ontologies and epistemologies that sustain a close relationship with the earth as forms of superstition or magical thinking, impermissible by the standards of scientific respectability. Nevertheless, they include much wisdom, especially when it comes to agriculture and knowledge of the environment. In ‘Cuba: Living Between Hurricanes’, for example, we discover the benefits of traditional animal feeds, or how the traditional form of construction known as vara en tierra is able to survive hurricane-force winds undamaged.

There were many other points of contact between the film and the day’s presentations, not least to the theme of extractivism that Paula considered in her introduction to the workshop, a term referring to the exploitation of natural resources for export that is the source of environmental injustice. This is interpreted by contributors in the film as an historical process of imperialist exploitation which has shaped Cuba’s geography and ecology for centuries. For another thing, as several people commented in the discussion after the screening, the film succeeds in integrating multiple voices into a collective conversation which privileges neither expert nor local knowledge.

The problem of erudite knowledge is often its compartmentalisation into different disciplines with different vocabularies, systems of classification and so forth, which end up excluding anything that fails to fit the dominant theoretical paradigms. The need to integrate different types of knowledge into cultural work was a theme running throughout the day, the imperative to find different and inclusive models of contestation with the potential to activate the collective imagination, a cultural politics that is ecologically aware and socially focused, in which nature is not seen as resources but as commons, thereby redefining the common good and common goods.