Although Paul Celan is my favourite poet, I was somehow unaware of his
poem, “Mapesbury Road”, which refers to a street that is about five minutes
from where I live in north-west London and was written in 1968 immediately
after the death of Martin Luther King and the attempted assassination of
West German student leader Rudi Dutschke. As I learned from a fascinating programme on Radio 4 about the short poem last week, Celan’s paternal aunt Berta Antschel – one of the few relatives of his who had survived the Holocaust – lived in a flat in the eponymous street, where Celan visited
her in April 1968 and wrote the poem, which was published posthumously
in the collection Schneepart in 1971. Like most of Celan’s late poems, it is
incredibly dense with compound words (e.g. “Mitluft”, which Michael Hamburger
translates as “co-air”) and therefore difficult to decipher. As George Steiner
says in the programme, Celan’s poems are “on the other side of our
current horizons”.

However, as the programme showed, the time and place at which
“Mapesbury Road” was written offer a couple of intriguing clues
to its meaning. It seems likely that the bullet in the poem refers to
the shootings of King (which took place in Memphis on
April 4) and Dutschke (which took place in West Berlin exactly a week
later on April 11). In a letter to his wife Gisèle Lestrange on April
10, Celan describes a meeting with the Austrian poet Erich Fried, who
lived just around the corner from Berta Antschel in Dartmouth Road and
knew Dutschke (in fact, Dutschke would come to stay with him in London
that autumn). Celan and Fried  talked among other things about Israel
and left-wing anti-Semitism, so it seems likely that the West German
student movement was on Celan’s mind even before Dutschke was shot a day
later. The reference in the poem to magnolias, meanwhile, was probably
prompted by the trees in Mapesbury Road that would have been in bloom in
the spring when Celan was there and reminded him of his childhood in
Czernowitz (and also connects, via the Billie Holiday song “Strange Fruit”,
to the murder of King).

An exhibition on the poem is also about to open at the Southbank Centre in London.
37 Mapesbury Road 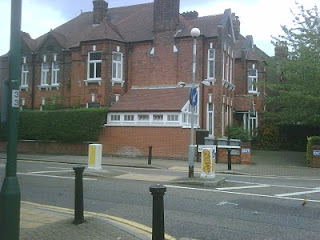 Out of curiosity, I had a look at 37 Mapesbury Road, Oliver Sacks’ old home.

It is enormous, even for a large family. It is now the headquarters of

the British Association of Psychotherapists.

This entry was posted in Digest, Miscellany and tagged Digest. Bookmark the permalink.