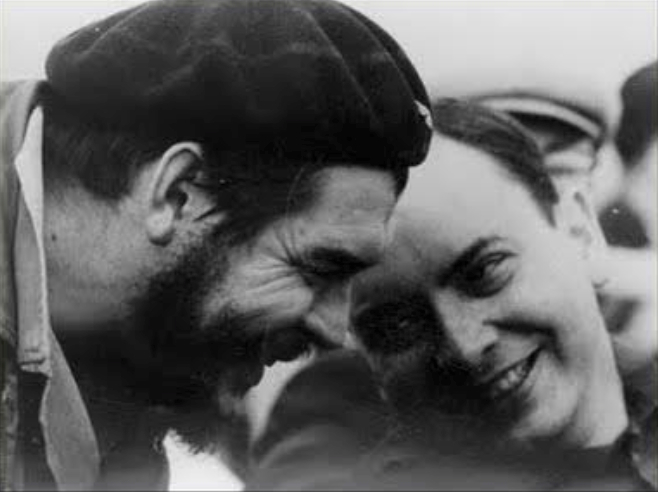 Here is a photograph of two Guevaras. With the death of Alfredo Guevara, the one on the right, at the age of 87, who was no relation to the Guevara on the left, Cuban cinema has lost its great champion. Alfredo was the founder of the Cuban film institute, the ICAIC, which was set up in 1959 just three months after the overthrow of the dictator Batista by the rebels led by Fidel Castro and Che Guevara. A kind of Cuban John Grierson, Alfredo similarly had no difficulty in combining cinema and political commitment, but he had the advantage over the Scots pioneer of documentary that his backer was not a senior civil servant in a bourgeois democracy, but the leader of a popular revolution who had been his friend since student days.

They first became friends when they went together to Colombia in 1948 for an international student conference, and found themselves caught up in the riots, known as the Bogotazo, sparked off by the assassination of the popular presidential candidate Jorge Gaitán, whom they were supposed to be meeting. Describing the scene to me many years later, Guevara compared it to another popular uprising which by chance he also witnessed on a foreign visit: May 1968 in Paris: spontaneous and unorganised. At that time, he told me, Fidel was not a communist, and it was Alfredo himself who first introduced him to the writings of Marx.

Born in 1925 (the year before Fidel), the son of a railway engineer who was one of the founders of the railway workers union, Alfredo belonged to an extraordinary generation of filmmakers whose work he enabled, including Santiago Alvarez (1919-1998), Tomas Gutierrez Alea (1928-1996) and Julio Garcia Espinosa (b.1926). All of them were members during the 1950s of a legendary cultural society, Nuestro Tiempo (Our Times), which was close to the Young Communists to which Alfredo belonged (although, like Alvarez, his political roots were anarcho-syndicalist; later he would call himself a ‘libertarian communist’). While Alea and Espinosa had both taken themselves off to study film at the Centro Sperimentale in Rome—the hotbed of neorealism—Guevara entered the urban underground, narrowly escaping with his life, and fled to Mexico, where he learned the trade of the producer with Manuel Barbachano Ponce, including a stint as an assistant on Buñuel’s Nazarín, whose spirit of anti-clericalism he shared. Barbachano also produced a regular ten-minute film magazine in Cuba on which the group served their apprenticeships, sometimes contributing comic sketches.

When the rebels seized power on 1st January 1959, it was Che Guevara who almost immediately got them started making films on behalf of the Revolution, by setting up a unit in the fortress of La Cabana that until a fortnight earlier was used to hold political prisoners. This was the core group of the film institute created by the Revolutionary Government’s first decree about cultural matters, which started by taking over the film businesses (including a studio) owned by one of Batista’s henchmen who’d fled the country. Later it would acquire the local distributors, being mainly the subsidiaries of the Hollywood majors, and some cinemas.

The whole history was recounted to me in detail by Alfredo himself when I was researching Cuban cinema in the early 80s, and I owe him a deep debt of gratitude for opening the film institute’s doors to me, and for giving me his own account of the political history which gave birth to it. He was one of a small group around Fidel in the early months of the Revolution, who all had the same understanding and met with him regularly with the aim of steering the Revolution towards socialist aims, which Fidel did not openly declare until the eve of the invasion of the Bay of Pigs by US-sponsored mercenaries in 1961. These discussions also set the agenda for the film institute’s production programme, with the eager participation of the young filmmakers.

Alfredo Guevara struck me as a man of deep political intelligence, a Marxist intellectual who had a strong commitment to the defence of artistic freedom within the Revolution—though of course his detractors saw him as Fidel Castro’s minion, charged with keeping the filmmakers in line. Yet he persuaded Fidel that cinema should be seen as art, not propaganda, and filmmakers should not be denied aesthetic licence—a position Fidel supported in a speech of 1962 known as the ‘Words to the Intellectuals’, with its famous formula, ‘Within the Revolution, everything, against it, nothing’. As it turned out, this would become subject to constant re-negotiation, but in the case of cinema, the argy-bargy went on within the Institute and not between the Institute and the Party Ideological Committee, which always had much more direct control over broadcasting and the press. (The number of Cuban films which didn’t reach the screens is far fewer than those made by the BBC about the Troubles in Northern Ireland which were stopped or shelved.)

Guevara applied the same principles of aesthetic pluralism to the Institute’s crucial function as state film distributor, steering a course between the attacks of near-hysterical liberals for refusing to exhibit an independent documentary called P.M., and the old Communist Party guard for exhibiting Fellini’s La Dolce Vita. In 1964, when a certain Blas Roca objected to the latter, Guevara was incensed. ‘To men like you,’ he wrote, ‘the public is made up of babies in need of a wet-nurse who will feed them with ideological pap, highly sterilised, and cooked in accordance with the recipes of socialist realism.’ Audiences should not be denied the right to see the work of aesthetically progressive European film-makers because they supposedly dealt in the portrayal of bourgeois decadence. Or as Fidel would tell Khrushchev, ‘The enemy is imperialism, not abstract painting.’

The problem the Institute faced was what to put in place of the 266 Hollywood films out of a total of 484 films exhibited in Cuba in 1959, since the supply was cut off by Washington’s declaration of economic blockade. The answer was of course to diversify, with more films from everywhere else. (When Che Guevara visited Tokyo in 1959 in search of new foreign trade agreements, he inquired on his namesake’s behalf about the possibilities for the ICAIC distributing Japanese films as well as purchasing equipment, and reported back to him in a letter full of fascinating detail for a film historian.) The result was that Cuban filmgoers soon became exposed to a wider variety of world cinema than anywhere else in Latin America at the time, and this, in turn, encouraged the exciting effervescence of Cuban cinema in the 60s, when it quickly started garnering prizes at films festival in every continent, precisely because it wasn’t just a reworking of old models.

In the early 1970s, which were ideologically difficult times in Cuba, with national cultural policy under the control of ideological conformists, the ICAIC served as a relatively safe haven for social non-conformists like the long-haired cantautor Pablo Milanes, and several gay directors. Alfredo himself was gay, and although he never came out publicly—that wasn’t something you could do in Cuba as a Party member at the time—the fact was not lost on his friends, and he spoke to me openly about the late 60s, and the unfortunate episode of gay repression, when ‘social misfits’ were being sent off for some hard labour in the notorious UMAP camps. There were protests by organisations like the film institute and the writers’ union, UNEAC, but he told me that when he first raised the issue with Fidel, the latter hadn’t known that gays were being rounded up just for being gay. Fidel had the UMAPs disbanded in 1967. Nevertheless, it has to be said that it had to await the late 80s before Cuban cinema included gay characters on screen, and not till Alea’s Fresa y chocolate in 1993 as the lead.

Alfredo Guevara remained a controversial figure, as they say, and in 1983, after an internal crisis—too many resources devoted to a single film, Humberto Solás’s Cecilia, which then misfired —he stood down from the presidency of the film institute to become Cuba’s ambassador to UNESCO. (The history of cinema is full of stories of studio bosses who have fallen as a result of some strategic misjudgement of production. In Britain, they are elevated to the House of Lords.) Eight years later he was brought back when the ICAIC was embroiled in another crisis, this time over a scatological satire which offended the Party faithful (Alicia en el pueblo de maravillas by Daniel Díaz Torres). This was 1991, and with an even bigger crisis engulfing the country with the demise of the Soviet Union, it became an uphill struggle just keeping the film institute afloat. Guevara remained in the post till the end of the decade when he handed over to someone new, but stayed in charge of the International Film Festival, which he had launched back in 1979.

With fewer people, fewer funds, and reduced production, the ICAIC is no longer quite what it was—yet Cuba now has a thriving independent production sector, making features as well as shorts and documentaries, and the Institute no longer has a monopoly. But the fact that the ICAIC still produces maybe half a dozen features a year, often combining considerable artistry and social relevance to their audience, and that it now forms part of a continuing strong and lively screen culture, all this is testimony to a life’s work well done.

A report in the Miami Herald says that Alfredo Guevara is to be cremated, and his ashes scattered on the steps that lead up to the University of Havana, a protest site for activists in those turbulent decades. I am leaving for a short visit to Cuba in a week. I shall go and walk up those steps and think of him.